Read the case study of how BK Medical migrated its SAP systems to Google Cloud with the help of partner Managecore to reduce CapEx and OpEx spending and improve user experiences for better business performance.

“Our tools allow surgeons and doctors to perform ultrasounds on patients in real-time, expediting the process,” says Michael Puleo, Global Director of IT at BK Medical. “We rely on SAP for our enterprise resource planning (ERP), HR, and other core processes to build the best possible ultrasound machines for  medical professionals who need them.”

BK Medical and its parent company had been running SAP applications in-house with on-prem servers. When the split occurred, it needed to separate its data and systems, which proved to be the perfect opportunity to get into the cloud. BK Medical ultimately chose to work with Google Cloud and partner Managecore to begin running its SAP on Google Cloud.

In some ways, we are a 40-year-old startup,” says Puelo. “We’ve been in operation since 1993, but now we are trying to stand up all our applications. Since we have a lean team, we needed a partner like Managecore to accomplish our SAP goals.”

Just ahead of the split, BK Medical worked to create a different company code in the same SAP system as its parent company. It then needed to establish how it could split the applications and run its own system autonomously. BK Medical also knew it would need to maintain its own datacenter but wanted to limit CapEx spending and minimize its on-prem footprint.

“Managecore crafted a great plan. I was able to act as an internal project manager while they took care of all the technical components.” Bringing Managecore into the fold helped BK Medical quickly stand up all its own SAP systems, and lift-and-shift its data into Google Cloud over one weekend.

Read the full case study to get more details! 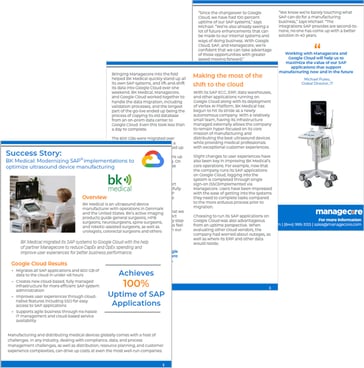